The school seat belt debate continues, with the primal focus on the student safety. Student safety is all about identifying potential risks coming from different corners. Most of the kids suffer injuries not while traveling in a school bus but at pickup and drop off points. It is hence the need of the hour to educate kids about various safety rules along with their strict adherence.

Along with highlighting the significance of reaching the pick-up point in advance, kids should be asked to exercise caution when they are getting on and off the school bus. Drivers, on the other hand should also be closely watched whether they are following the safety norms while driving. If such safety measures are followed both by drivers and students, the propensity of accidents caused to school students can be brought down significantly.

To answer this question as to why school buses don’t have seat belts, you need to delve deep into the opinions expressed by school administrators who look seat belts as unnecessary devices. Below is the rundown of the various reasons given by them. 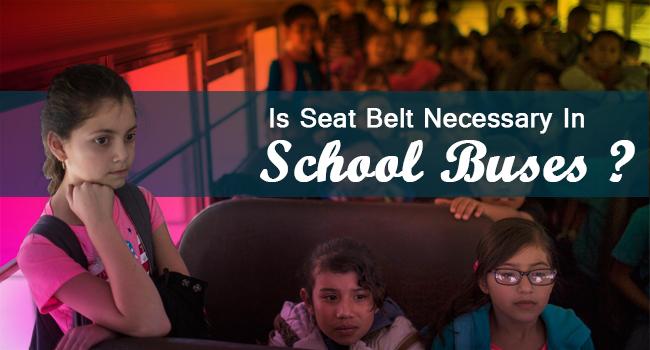 This question is looking for responses in favor of the installation of seat belts in school buses. Therefore, here we present all those arguments that strongly advocate the use of seat belts for multiple reasons.

Is It Good For Student Safety In School Bus?

Accidents do not happen every single day. These are rare instances that one should be prepared for, especially when it concerns the safety of young kids being transported to and from schools to their homes. School buses are the preferred means of transportation for most of the parents for simple reason that they ensure a great deal of student safety.

Statistics report that school buses are 16 times safer when compared to reaching school in a family vehicle. Under this section concerning student safety linked to seat belts, you will be able to come to a conclusive decision whether seat belts actually guarantee student security or not.

The following are the substantiating opinions about how seat belts in school buses do not guarantee or improve the safety of students.

Many districts in the United States employ close to 40 safety standards while designing and constructing school buses. These come in the form of superior and reliable brake systems, bright red indicator lights, cross-view mirrors for clear visibility, escape outlets to roofs, stop-sign arms and emergency exits.

If you look at the school bus seats, they come with high-quality padded seatbacks which absorb the impact of a crash. Sporting a bright yellow color which attracts the attention of both commuters and other vehicles on the road, school buses promise protective seating teamed with impact-resistant features. These seats also guarantee strong rollover protection systems.

Research reveals that your kids are 70 times safer while commuting via school buses when compared to traveling by car. The very fact that school buses are not built as if they are passenger, vehicles makes them the safest means of transporting kids to and fro to their schools.

The increased height and weight of school buses in addition to the length of school buses are the positive attributes that safeguard them against frequent crashes. Incorporating a body-on-frame design, modern school buses come fitted with anti-lock braking systems; a welcome step towards the safety of school kids.

If school buses install a combination of lap and shoulder belts, they would require stiff seats. Stiff seats can lead to injuries in the event students do not buckle up and a crash occurs. There can be instances of injuries caused to the abdomen when kids can slide down, hurting the organs below the abdomen of students who did not buckle up.

School buses are tagged as the most regulated vehicles on the road, not only on account of their unique designing but also for the fact that they have a strong legal protection. Law is always on the side of students who are either alighting or boarding a school bus, making it an offence for the driver to drive past a school bus which is picking or dropping students; in any direction.

1. Given the crucial necessity of evacuating students during an emergency, seat belts are an evident hindrance. When all the kids are fastened to their seats, it becomes a herculean task to push them out of the school bus after a crash.

2. Another concern here is linked to the driver who has to ensure that all the 70 odd kids in his bus are fastened to their seats. There has to be another person who has to oversee all the students, adjust their seat belts and confirm that all of them are used properly.

3. Kids come with different constitutions. While some kids are bulky, there are others who are lean. Seat belts should be adjusted in line with the bodily requirements of smaller and larger kids.

While all the above arguments do not favor equipping school buses with seat belts, there is one exception with regard to small school buses which weigh 10,000 pounds or less. It is for such school buses that lap or shoulder belts should be fitted with seat belts since they weigh closer to what passenger trucks and cars weigh.

Hence, in order to ensure the safety of students traveling via smaller school buses, it makes sense to fit them with seat belts so as to offer superior protection to all those who are onboard.

In an attempt to weigh the pros and cons of equipping school buses with seat belts, you may visualize the below scenarios which are likely to occur on a fateful day.

Firstly, you can imagine the instance of a crash involving a school bus that had seat belts installed. In such a school bus, it is a common phenomenon to find most of the students strapped to their seats with an exception of some who haven’t. The bus meets with an accident. Upon the strong impact coming from a head-on collision, all the students who weren’t strapped will slam into the students who have buckled up.

Such an impact will not only force the strapped students to bear their own weight but also to counter the additional weight coming from the students who have fallen on them; those who didn’t fasten their seat belts. Isn’t it a possibility for belted students to experience a doubling crash impact? Indeed, it is! Such an occurrence can invariably cause serious injuries to students. 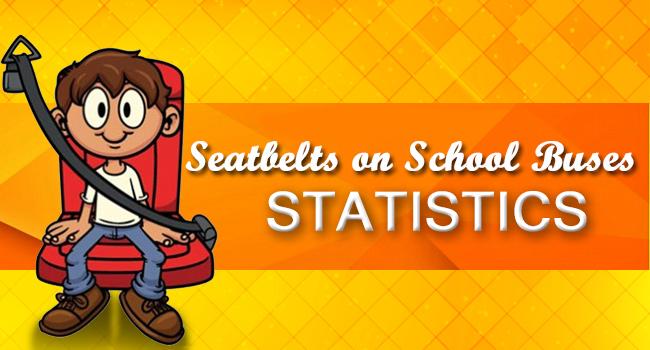 Described below is the statistical information that will serve as pivotal data points substantiating the effectiveness or the impracticality of seat belts in school buses.

How Much Does It Cost To Install Seat Belts in a School Bus?

The debate revolving around the installation of seat belts in school buses does not seem to conclude, especially when you are informed of the fact that school buses are the safest means of transportation. Here, you will be informed about the costs that need to be incurred by school administrations operating a fleet of buses fitted with seat belts.

The Budget for Seat Belts in School Buses

According to a CNN health report published by the NHTSA (National Highway Traffic Safety Administration) in 2016, schools are required to set aside an average amount ranging between $7,346 and $10,296 for a large school bus to maintain its seat belts. That means, every big school bus fitted with seat belts will need to incur an average incremental cost anywhere between $7,000 and $11,000. However, this figure takes into consideration the initial installation costs of equipping a school bus with seat belts. Given that the life of a school bus spans 15 years, you can expect these operational costs to come down with every passing year.

As recent as 18th May 2018, a news feed reported by CNN described a horrific school bus accident. This incident fueled the argument whether school buses should come up with a mandate for seat belts.

The tragedy occurred when a school bus ferrying kids to a field trip in Morris County, New Jersey collided with a dump truck and tilted to one side, on 17th May 2018. The impact of the collision proved fatal for one kid and an adult, in addition to injuring 43 people. News states that some of the seriously injured passengers might need surgeries to recover. This recent incident brought to light the effectiveness of seat belts in saving the lives of school kids.

Since seat belts belong to the jurisdiction of individual states, it was time for New Jersey to come up with laws concerning seat belts. In the wake of this tragedy, New Jersey’s law would make it mandatory for school buses to be fitted with three-point seat belts on high back seats.

Worried parents expressed their anguish over a school bus accident that took place in Chattanooga, Tennessee on 23rd November 2016. The accident, which claimed the lives of 5 school children and injuring 31 raised queries whether school buses should still be considered as the safest means of transport on American roads.

The CBS news reporter covering this accident shed light on the arguments revolving around the significance of seat belts that are essential for bulky school buses as well.

Over-speeding on driver’s part was the main reason behind this mishap. It was also learnt that the driver was speaking to his colleague over his mobile, while he was at the wheel. The distraction caused by the conversation coupled with over-speeding led the bus to a crash along a narrow and steep road; tilting it to one side.

The school bus did not have seat belts creating enough room for the million dollar argument to come up. It was time for the advocators in favor of seat belts in school buses to press the need for seat belts. As a strong retort, the arguments against the use of seat belts also came up. They quoted the increase in operational expenditure to install seat belts coupled with the stringent design standards that are followed by school bus builders.

These arguments were further strengthened by the opinions of drivers who felt that seat belts could come in the way of evacuating kids in the event of an emergency like fire or drowning.

With innumerable arguments in favor of and against the installation of school bus seat belts, it is for you to decide which way to go so as to ensure the safety of school students. Whether school administrators would choose to boost up other safety measures or would go ahead and install seat belts, it is only to ensure that every kid reaches his/her home safe from school.